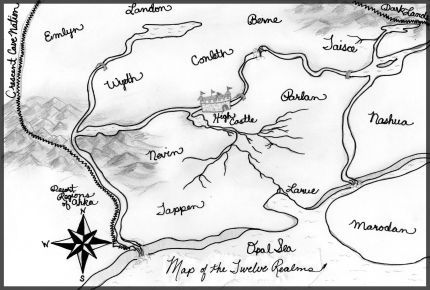 A Whisper of Doubt in the Forest

The group stopped for the noon meal, and Princess Eliya slid off her horse with more bounce in her step than at the outset of the day. Even though she ached in places she didn’t know existed, it was refreshing to be out in the countryside.

Her home, High Castle, was situated on a hill next to Solfen River, but the area all around was fairly flat and somewhat mundane. This place, Taisce, had true majesty. The land’s backdrop was mountains looming before them as though they were giants at rest. She was captivated by this view to the north as soon as they cleared the forest. Here, the air felt fresh and cool.

Eliya walked a short distance away from the group, certain she would hear those great peaks speaking to her if she could get far enough from the sounds of the people and animals. She closed her eyes and felt the soft breeze roll over her neck and cheeks. The wisps of wind pulled at her raven hair and tickled her forehead.

Listening intently, Eliya thought she heard the sound of a creek nearby. She opened her eyes and looked back to see everyone busy. Instead of bothering them, she decided to take a look for herself.

She could tell the sound was not far and headed through the tall grass toward a copse of birch trees. The sound of gurgling water grew louder. Eliya took cautious steps through the brush as it became thicker and more uneven. When she reached the water’s edge, she froze. She thought she saw or heard something on the other side, though nothing seemed to move except the grass in the breeze. Eliya relaxed and looked closer but still saw nothing. After a moment, her eyes traveled back down to the bubbling brook making its way lazily through the stand of trees.
She bent down to touch the water, but before her fingers skimmed the cool, wet rocks at the edge, a hand shot out and grabbed her arm. Eliya’s breath caught in her throat.

“My lady.” His voice was a deep rumble, sending shivers down her spine. “Why have you wandered from the group?”

Her immediate desire was to quell the rush of fear by which she’d been overcome. She didn’t answer right away but looked down at his hand, still wrapped around her upper arm.

In an abrupt manner, he dropped his hold and bowed his head. “I’m sorry, my lady, but while this is part of the Twelve Realms, it’s one of the more dangerous parts. You shouldn’t leave the group unattended.”

Because her pride was smarting and her heart was still racing, she didn’t reply right away. She also forced herself to ignore the intensity of his deep blue eyes.

“I can take care of myself, thank you very much. You certainly didn’t need to accost me to prove how dangerous it is here.” A quick survey of the area around the creek revealed nothing, except to prove to her that they were alone. “I was fine until you showed up. What is your name? I recognize you from my brother’s guard, but I don’t know you.”

She stared at his downturned face and could see the color rising in his cheeks. She must have embarrassed him. Well, good, she thought. Serves him right.

He looked up, only to stare straight into her eyes. It confused her when he gawked and didn’t answer. Eliya self-consciously touched her hair before her growing confusion morphed into frustration.

“Well, soldier, out with it. What’s your name? I should have you punished for unduly accosting me.” Eliya raised her eyebrows with mock severity. “You’re lucky I’m only curious.”

He gave his head a slight jiggle to clear his thoughts. “I’m Gavin of Taisce, Your Highness. I apologize for causing you any distress. I truly was entirely worried for your safety.”

“Well, Gavin of Taisce, you are forgiven, although if it happens again I may have to enlist the help of my handy dagger.” She couldn’t hold back her puckish sarcasm.

Gavin laughed. He’d caught on to her humor, but she had no idea the joker in him wanted to offer an equally sarcastic reply. The thought of further banter was cut short, though, when Gavin’s head swiveled to scrutinize the bushes on the other side of the brook.

Some protective instinct must have overcome him as he stepped around Eliya and scanned the distant terrain. Eliya sensed the change in him and stood still, looking out into the woods. After a time, Gavin spoke in a low voice.

“Please walk straight back to the camp, my lady. I am right behind you.”

Eliya, caught up in the serious timbre of his voice, didn’t hesitate to obey. Without a second thought, she flitted out of the copse of trees and across the grassy plain. The questioning look on her father’s face didn’t go unnoticed when she arrived at the temporary camp, breathless and a bit disheveled. He made no inquiry of her whereabouts, though, for which she was grateful.

She watched Gavin return some minutes later. He went straight to High King Dante’s general. Shortly after their brief conference, they were all loaded and on their way, everyone anticipating a good night’s rest ahead, safely behind the castle walls.

I totally cheated this week! 🙂 The Beauty Thief screams FOREST! so I just had to do it.

Also today is my dear Karl’s (Ssenlrak) birthday! Make sure to wish him a happy one! 🙂

21 thoughts on “A Whisper of Doubt in the Forest”