I’m going to blame it on the fact that I was in Montana with no real phone signal on vacation with family that kept me from seeing this review before now. I’ve been back couple days, but it’s been a whirlwind of activity every day.

Thank you to Danielle Urban over at Urban Book Reviews for taking a chance on Captive Hope and reviewing it for me! Check out her fab review on the blog by clicking the link below! ❤ 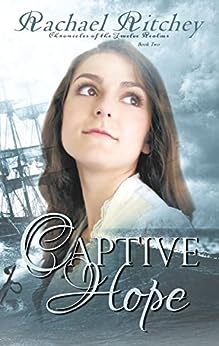 The Twelve Realms seems an idyllic nation, but behind locked doors, there are sinister powers at work. Not even the royal family of High Castle is outside their reach, and Lady Idra has unwittingly placed herself in the crosshairs of a shrewd mercenary.

Idra is noble by birth and lady-in-waiting to the future High Queen of the Twelve Realms. Yet she’s unaware of her true value and strength. From her youth, she has been pledged in service to the crown, and though accepting of her duty, she inwardly longs for more. But in her wildest dreams, Idra never imagined the terrible future devised for her by forces unknown.

Sir Ahmad, a knight of the realms, admires Lady Idra from afar. But when he finally has the courage to tell her, it may be too late. He could lose Idra forever because of one man’s devious ploy to gain revenge…