Guys, gals, peoples, beasts! Have you heard about this new book yet? If not, you are missing out. Nexus Gate 4037: The Animal by Candice Coates is a must-read for anyone who enjoys sci-fi, time travel, futuristic worlds clashing with history, and the like.

but paperback and other ebook options are coming soon!

Click here to go get your copy right now!

Today you’ll get a quick synopsis of the story and learn more about the talented author. Stick around and be sure to ask any burning questions in the comments section.

From the Back of the Book

Most important rules of time surveillance; never disrupt your host timeline and never step into the future. Decorated Surveillance Specialist Vivian Leona of 6037 has broken both.

Losing her husband, John Joseph Spruce, in the Nexus of time past, Vivian mistakenly pulls the wrong man into the future, a man recorded by history as having died on that very day in 1837. The consequences for keeping him alive in the future could prove far worse than Vivian bargains for, especially in the American South’s New Golden Age, 4037, where any overt emotion or cause of such, like racism, is seen as a deadly contagion—‘conditions’ cured only by euthanasia. 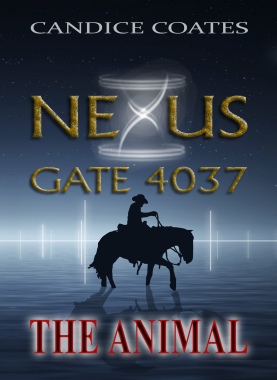 Slave foreman and bounty hunter ‘Tucker’ John Josephus Spruce of 1837 is called ‘The Animal’ by those he hunts, and a ‘necessary evil’ by those who enlist his skills, but are his ‘talents’ enough to keep him alive when he steps into a deadly snare set twenty-two hundred years in the future where he is now pawn and prey?

Will Tucker John’s instincts lead him towards retribution for his abduction, or will they make Vivian his only ally while setting him on an unexpected hunt for the one not only out for his blood, but the very woman he’s purposed to destroy?

Now, I’m still in the midst of reading this, but I’m already hooked. Hooked. There are some great twists that hit you right from the beginning, plus the characters are interesting, distinct, well-developed, and likable (or unlikeable as the case may necessitate).

Find your way to Nexus Gate 4037: The Animal today!

And because I’m so excited about this book release, Candice Coates agreed to do a short, sweet interview with me! Now you can get to know this genre-jumping author a little better too.

Rachael: Candice, thanks so much for being here today and letting me put you in the hot seat. Is there one particular moment when you had an epiphany for the story for Nexus Gate 4037: The Animal? If so, what was it? If not, how did you come about forming the idea?

Candice:  I didn’t so much as have an epiphany but a literal dream where a Gate opened in time and a runaway slave being chased by a posse stepped into the future. For nigh on five years after that dream, I continued to think about what happened next and from those wonderings, Tucker John was born and the series took off from there.

Rachael: And you’ve really started this series off with a bang! If you had to choose one writer who has influenced you the most, who would it be?

Candice: Oh man, that is tough. I’m going to cheat a little and name three writers since these three together gave me the drive to tell my stories and gave me the roadmaps for how to present my content. Those writers are ( in no particular order) Octavia E. Butler, Frank E. Peretti, and James Byron Huggins.

Octavia E. Butler wove excellent science fiction with strong female leads. To me, her characters expressed a sense of self and courage even in the face of the most adverse circumstances. She did this, portraying women of color, during decades where ethnic divides and negative stereotypes were still thick in American culture. We still face many of these issues in more passive-aggressive ways, but the seeds her work planted in me, I believe, are shown in the fruits of the characters that I write today.

Frank E. Peretti’s work influenced me to write by boldly weaving Christ in the lives of the characters, each having their own experience with faith on whatever level that may be. He showed me how to weave a Christian Science Fantasy that has a moral point to the entire tale, a take away that goes beyond mere entertainment.

James Byron Huggins, also a writer of Christian faith, influenced me to dive deeper into speculative science fiction. For instance, his story Cain made me wonder, with the technology and the spiritual realities that we face today, could his stories really happen. Furthermore, it made me wonder, how can I present my characters, male as we all female, in a way that readers found relatable as well as believable in their flaws.

Rachael: After having the opportunity to beta read another of your upcoming novels and what I’ve enjoyed of Nexus Gate thus far, I have got to say that you’ve articulated how these authors have influenced you quite well! In writing your own stories, what would you most like everyone to know about Nexus Gate 4037: The Animal?

Candice: Without giving any spoilers, I want readers to know that the best and the worst of us, facing the same circumstances can prove unpredictable in our ways. Humans are flawed. The best of us make grave mistakes and the worst of us can either increase in our nefarious ways or we can change. The question remains, what choice will we make. The choice of response is always ours, for better or for worse.

Rachael: Wow, that’s deep in the best possible way. What is one thing in the story that was specifically influenced by a family member or close friend? You don’t have to name names! haha

Candice: There is a scene where Tucker John is having a fit about the meal he is being given to eat. He uses the phrase “orphan food.” A friend of mine described a similar meal to the one Tucker John has but without the tantrum.

Rachael: Ha! That’s so great. I love to see the big and small ways our lives can influence our writing. It’s always a positive note to any story, really. Thank you so much, Candice, for taking the time to let me ask you a few questions. I wish you great success and am enjoying your book immensely! 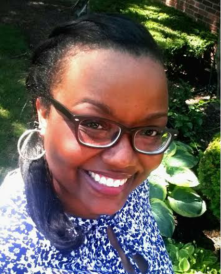 Born and raised in central Ohio, Candice has always had a love for telling a story and bringing to life the seeds of worlds born in her dreams and imagination, weaving together concepts of struggle, adventure, redemption, and triumph. While she loves to tell a new story, she appreciates and is drawn to the challenge of reforming and exploring different ways to interpret common concepts within her own work especially themes such as time travel, alternate universes, alien encounters, and anti-heroes just to name a few. Jumping from genres ranging from speculative science fiction, fantasy, action-thrillers and even to comedic contemporary romance, Candice allows her faith in Jesus to kiss each piece with a touch of faith and relatable hope. Her debut novel, Nexus Gate 4037: The Animal, is available now on Amazon, will be available on iBooks, Nook, and Kobo October 26th, with the paperback coming out in November 2018!

3 thoughts on “Step Through the Nexus Gate with Candice Coates”